This recipe was an instant hit.  I have to make a double batch if I want leftovers for the next day.

It pairs well with steamed veggies like broccoli or edamame.

When I was a kid I disliked soups and stews, and hated even the idea of lentil soup.  Fortunately I became more open-minded as an adult, and found that I absolutely love lentil soup.  It’s very healthy for you, to boot.

The red lentils in this recipe break down and make a very creamy soup.  Green and brown lentils may be substituted, but black lentils don’t work out well.

You can try other vegetables as substitutes or additions, including sweet potatoes, butternut squash, mushrooms, celery, or whatever you have on hand.

Optionally, stir in (up to) 5 cups of spinach before serving.

This is our family dog.  She is waiting for me to take her for a our regular after-dinner walk. 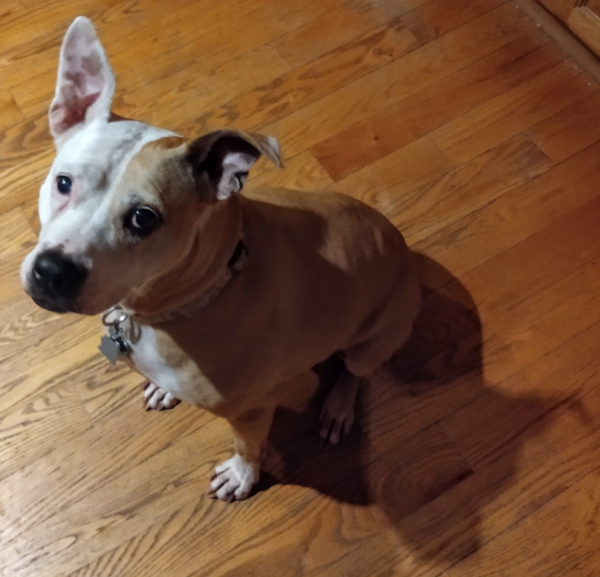 I am changing her name from “Butter” to “Aka Lana Lana” (“Hopeful Shadow” in Hawaiian) as she closely follows me around the house from the moment we finish dinner until I actually take her for a walk.

Last night, Beta spent half an hour out on the deck. She was wearing the wool cape I got her last Christmas. She had her new noise-cancelling headphones that block so many of the sounds that bother her. She used the new family telescope to check out the Pleiades.

That was pretty awesome.

I am shocked, shocked I tell you! that my children actually enjoyed this recipe.  I’m not sure why, perhaps they have given up all hope of enjoying a decent meal from my kitchen and now sullenly submit to my demands that they eat the goddamn food that I paid for and worked hard to put in front of them and it’s not like you do any chores around…  Ahem.  I got a little off track here.

Whatever the reason, they ate this one on my first attempt.

These are basically middle-eastern meatballs.  You can cut in other things with the meat, serve them in a variety of ways, whatever floats your boat.  (I rather enjoyed wrapping them in some naan with rice.)  It’s a meatball.  It’s the spices that make it.

The oven instructions are below.  We haven’t grilled them yet, but they should do great, just use a little grill-sense.  It’s a reasonably easy and fast recipe, ~20 minutes to prep and ~20 minutes to cook.

The recipe plus rice and other sides makes enough for 6-8 people.

If you plan on skewering the meat, and you’re using bamboo or wood skewers, soak them in water for ~30 mins.

Usual disclaimer with ground meat dishes: make sure the internal temp is at least 160° before serving. 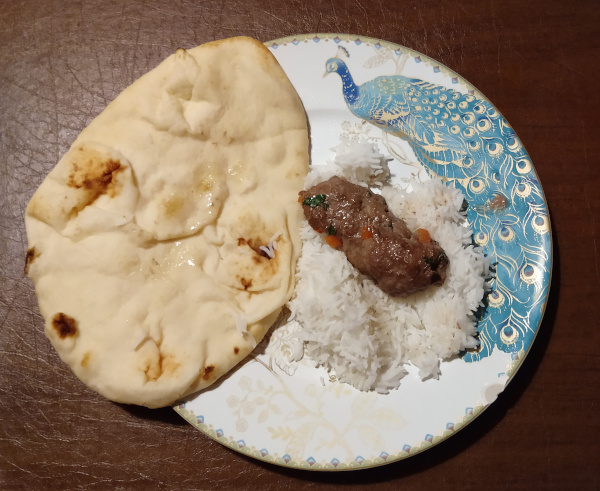 After the first full week of quarantine, some observations.

Looking ahead, it seems that we might have to collectively hunker down for months, perhaps a year, perhaps more.

“The real winner of this pandemic are the nation’s dogs, who are experiencing unprecedented levels of People Being Home”

If you’re reading this far enough in the future, a bit of context may be needed.

As SARS-CoV-2 entered the United States a few weeks ago, we collectively looked at the ongoing experiences of China and Italy and jokingly compared it to Captain Trips.  Meghan and I studied the history of the Spanish Flu looking for parallels and worst-case scenarios.

The lessons learned from 1918 are being applied by health officials right now, in an effort to avoid a healthcare-system-crushing pandemic.  We can’t avoid contracting the virus, that is clear, but perhaps we can prevent everyone from catching it all at once.

In the middle of last week schools in the Commonwealth of Massachusetts started closing as a preemptive measure.  Many businesses did as well, including my own.  A few did not until they were ordered to. This all mirrors the experiences (and failures) in other countries that were hit by the virus first.

As I write this, the governor has ordered all schools closed for at least three weeks.  Large gatherings are prohibited, originally capped at 250 people and now capped at 25.

“These gatherings include all community, civic, public, leisure, faith-based events, sporting events with spectators, concerts, conventions and any similar event or activity that brings together 25 or more people in single room or a single space at the same time.”

The ban also prohibits eating at restaurants (take-out and delivery are still allowed).  By extension that essentially closes most bars, since you can’t take drinks to go.  Bars garnered a lot of bad press over the weekend as people noted lines “out the door” at many downtown Boston establishments.

So basically we could go out if we really wanted to, but there’s no where to go right now.

Grocery stores are still allowed to be open, so people can buy things eat, but the doomsday preppers have effectively cleaned the shelves.  Stores have struggled to keep essentials in stock, including (oddly) paper products like toilet paper, kleenex, and paper towels, as well as the true essentials that never spoil, like bread, milk, and eggs.  Meghan witnessed someone buying five gallons of milk on Saturday. It’s like snow is coming.

Some businesses are instituting, or are relying on, work-from-home policies; unfortunately others, especially service-oriented jobs, are sending people home without pay.

I’m fortunate that I can work from home.  We’ve cleaned out the office so I can get real work done, and made a spot for Butter to curl up.  Meghan’s situation is a little murky, but so far as we can tell she will continue to be paid for the duration.

The kids are starting to get remote assignments from school.  I expect the pace will pick up now that a longer, mandatory stay-at-home order is in place.  Some schools in harder-hit areas have stayed open because they support homeless and needy children, providing much-needed meals and warm places to wash up.

Baba has been asking for advice on what social events to attend.  (answer: zero.)  My own parents have continued to live like nothing has changed, though they’re a bit less social than Baba.  All three grand-parental-units are in multiple high-risk groups.  Connecticut has been less affected by the outbreak so far.  I’ve got my fingers crossed that they’ll come through without contracting it.

I got a fish tank a year or so ago. It’s one of those Back to the Roots garden tanks that support a betta and three plant buckets. We had an alge problem, so we added a snail. He gets around a lot, so we call him the SpeedSnail.

(The fish is Fish Stick. It’s what was for dinner the night we brought him home.)

Yesterday, I noticed that the tank walls were getting a little brown. I decided today was the day to clear the counters and do some maintenance on the tank. The first part of that maintenance is to take out the plant pots.

So, I take out the middle pot. The roots are a little long, but not bad. Take out the far left pot. That one is ew and I may need to invest in new growth rocks. Then comes the one with the spider plant in it. This was an experimental plant. I look in the pot and notice one of the rocks looks strangely smooth. And round.

We collect shells. I have several snail shells from various beaches and our yard. So the obvious first thought is, “who put one of the shells in there?”

He must have climbed up the feeding tube, gotten across the rocks, and discovered there was no water up there. He sealed himself up, and waited for the water to come back.

I watched him for a while before I left to meet Quinn for lunch, and spotted him sneaking a peak from inside his shell. When I got back to the house, he was busy hoovering up alge as fast as he could.

So, the snail had an adventure. The tank will get nice and clean again. FishStick can make aggressive moves against a tank-mate that can’t care less about what he’s doing.