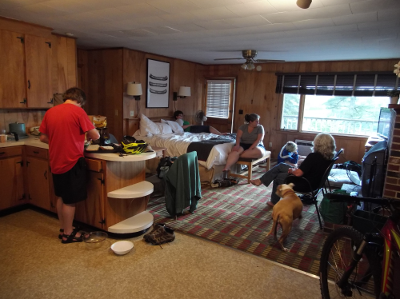 Our friend Sam is scout master for his son’s Boy Scout troop.  In order to teach the kids knots he put together a knot board to tie eight of the most important knots to know.

There are ranks.  “Captain Jack” is when you can tie all eight, in under two minutes… while blindfolded.

We are very proud of Meghan, who missed being “Fleet Admiral” (all eight, under a minute, blindfolded) by mere seconds.  She beat the pants of every member of the troop, including Sam’s own son.  Fortunately for my own ego we had to leave and could not try for Fleet Admiral one more time.

We spent the day with our very good friends Sam and Joanne, and their child who will be identified in this blog as Mu.  The kids all grew up together so they enjoy meeting up too.

In our absence, something new sprouted up in Storrs that Sam and Joanne wanted to show us: The Adventure Park.  It’s an aerial park – meaning that you spend your time up in the trees.  There are several courses of varying difficulty to choose from.

In order to climb, you’re strapped into a harness similar to a rock climber’s, with a couple of integrated carabiners and a zipline pulley.  The carabiners can be locked-closed, and are linked via cable.  In order to unlock one, you must lock the other, and the mechanism to unlock is built into the safety lines that guide you through the course – so you must always be clipped in.  Once you start the course, you cannot get into a situation where you’re not clipped to a guideline or tether until you reach the end — very safe and difficult to screw up accidentally or intentionally.

The courses include a mixture of obstacles, ziplines, and lengths of high-wire dare-devilry.  The staff is watchful and makes sure everyone is conducting themselves appropriately, as some bits can be a bit challenging.  There is one course that, we are told, active-duty Marines have trouble with.

Sadly, I did not bring appropriate footwear.  Flip-flops are verboten so I could not climb.  The girls scrambled up without a second thought, however, and left me to take photos.  I’m very proud of them!  They handled themselves with grace, and without fear — even when they were forty or fifty feet off the ground and traversing a span like a tight-rope walker.

The park itself is remarkable.  The trees are carefully trussed to hold up platforms and guide-wires with minimal damage — nothing is nailed in, instead the cables are wrapped and tied, and the platforms are help up with wedges to provide friction fits.  Their business model works best when people feel comfortable that the space will not be damaged, so nature preserves and landowners will allow them to set up installations confident that the impact will be minimal.

Both girls ran into a bit of trouble right at the very end on some obstacles that were wreaking havoc with everyone else, too — a staff member was already up in the trees, having just helped extract the previous victim, and was on-hand to help.  The obstacles were upright-‘L’ shaped logs that didn’t behave well when stepped on.  The girls made me proud by keeping their heads, trying to extricate themselves before asking for help, and actively assisted in their rescue (rather than some other people, who just glumly hung there while getting pulled to the next platform).

We stayed and let the kids weave through the courses for a couple of hours, until the shadows started getting long and we had to start planning for dinner on the road.  All in all, it was expensive ($70 for the two kids) but well worth it.

I was reminded over the weekend about The Last Ringbearer while talking with my buddy Sam, who likes The Lord Of the Rings but had never heard of TLR.

The tl;dr version is it’s LOTR as told by the losing side.  I enjoyed LTR more than LOTR because it provides more context to the events – the political manoeuvring and intrigue, about-faces, and a far more rational  explanation for why the battles portrayed in LOTR are so important.

[The kids are watching “How To Train Your Dragon 2”]