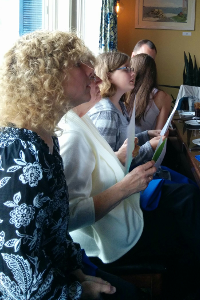 Not many words this time, just a photo montage.

My uncle Peter is turning 80, so of course there was a bash thrown in his honour.  We came down from Massachusetts but our trip was minuscule compared to my uncle Curt and aunt Vera, who drove (drove!) all the way from California.  They’re making a road trip of it, though, and taking their time getting back 🙂

In addition to Curt and Vera, the entire Eastern Jones Clan represented – nineteen people in all.  We don’t do this enough, and as Kennon said, “This is the first time we’ve eaten someplace that doesn’t have napkin dispensers on the tables in like five years.”

Happy birthday, Uncle Peter!  I’m sorry that I didn’t include twenty bucks with your birthday card — you know, returning the favor.

Our excellent dinner was at the Harbor House (Google Maps).