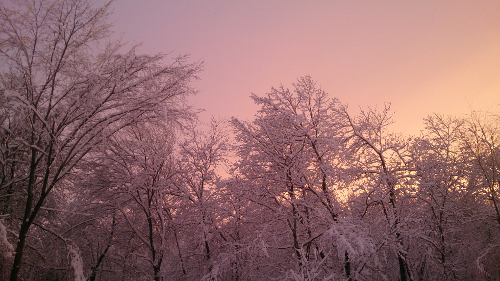 This winter has been kind of a bust as far as snow goes. Thursday I was wandering around in a t-shirt because it was 60 degrees! And then The Snow Came. The kids had a snow day, I worked from home, and Dad decided to go into the office. He was sad that he missed the traditional breakfast of all snow days, french toast. I explained that you only get french toast if you stay home. Its in the rules. Really.

The snow is that heavy, wet kind that takes out trees. We only lost the one branch 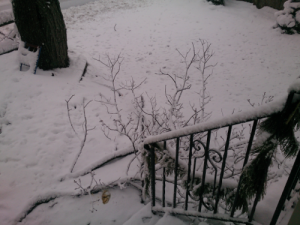 (at the front of the stairs, just for the extra drama), so it could have been much worse. After Dad got home (I made him send me a Glympse so I could watch him drive home), we decided to go out and brave the roads to honor our family tradition of Friday Night at the Mall (don’t ask. I don’t know how it started). We got dinner and toddled off to Newbury Comics to see what they had.

We had a grand time. Beta found some quidditch goggles, and had enough money for them, so now she is their proud owner. I found so much stuff I would love to own, but I don’t want to actually pay for/store somewhere in my house. Alpha swears she loves comics, but she never seems to find the one that sings to her. I’m waiting for her to discover Sandman.

The drive home was beautiful, because the trees were all spangled with snow. They glowed in the headlights. There were a few new branches on the ground, which was a little nerve-wracking, but it looks if it was going to fall, it has.

This afternoon, Dad had to go down to Willimantic to help out one of his old clients. Of course, we stopped by Panera first for lunch (because Panera). He left from there, and I wandered down to a display of snow pants on clearance. On the day after a snow storm. I love how this works.

One pair of snow pants for Alpha later, I dragged the girls and Beta’s friend Lambda out to sled. First at the Senior Center here in town (which seems to be frequented by the little kids), and then Woburn Street School. They had the whole place to themselves, and spent about an hour blazing trails, building jumps, and sledding. 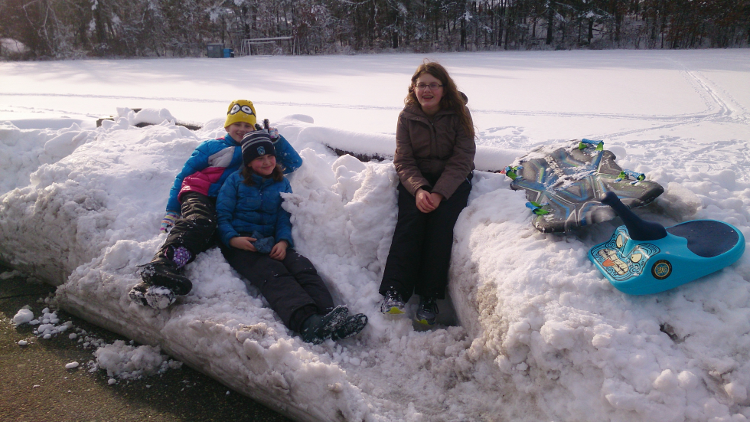 Much fun was had.