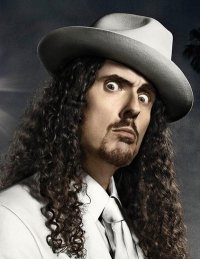 Weird Al Yankovic was a big part of Meghan’s and my childhood, and pretty much anyone in our generation.  You could say he’s a hero of sorts.  When I found out, quite by accident, that his latest tour had dates near us I bought tickets the same day.  The only decision was which venue.

I chose the Lowell Summer Music Series; as Meghan said, if it rains we would be able to say that not only have we seen Weird Al live, but we saw him in a high school gymnasium.  (The high school next door is the rain location.)  It’s outdoors and BYOBlanket; so long as it didn’t rain and move indoors the kids are free.

So, on the appointed date and earliest possible time after work (which was earlier today, as I write this) we packed up the kids and a blanket and headed to the park to stake out a spot.

The show was flawless.  It was small enough to be fun, large enough to let the crowd’s energy really flow, and turned-down enough that I wasn’t deaf at the end.  Alpha and Beta spent most of the show in a corner of the park with some other kids, but they enjoyed the show immensely as well.  Their view was better than ours, despite the distance — they could see over the crowd, while we had to contend with the sound booth/tent.

There was a good mix of old and new songs over a couple of hours, interspersed with video clips while the band changed costumes.  Among other songs (in no particular order), there was Tacky (the opening number), Dare to Be Stupid, the aforementioned Fat, Amish Paradise, White and Nerdy, an awesome arrangement of Like A Surgeon set to the “unplugged” arrangement of Eric Clapton’s Layla (really), a couple of polkas interspersed throughout (of course), and closing with Yoda.

The girls were buzzing as we left the park, and wide awake despite a) being 10 pm, b) after a regular day of school, and c) on the first week of school.  They can sleep in tomorrow, there’s no school, and Meghan and I aren’t setting an alarm — our jobs are flexible enough that we can afford to be a little late.