My knitting mojo is back! I guess the job was making me more nuts than I realized. So glad I found a new one!

I cast on Scopes again. I love the pattern, it is super easy, and it looks amazing. I wanted to use up stash yarn (I’m not quite SABLE, but it’s getting close). Found yarn that refused to be a Christmas stocking, and cast on.

Looking at my color choices later, with the big, bold stripes, I realized something.

“I think I’m making a flag hat by accident.”

Quinn, who is sitting next to me surfing Reddit, looks at the hat, and starts googling for flags with white, red and green.

Depending on where you are in the pattern, a case can be made for the flag of either Hungary or Bulgaria. I still love it. I’m just going to call it the Hungary Bulgarian hat on the project page. ?

I did not believe.
He said
When my robots storm
your front lawn
you will understand.

As a mathematician, I take care not to be caught doing philosophy. When I buy my copy of Philosophy Now, I ask the newsagent to wrap it up in a brown paper bag in the hope that it will be mistaken for a girly-mag.

Another change of venue this year: Wellfleet, MA.  We seem to be creeping further up the Cape every year.

We left the house around mid-afternoon, planning to arrive fashionably late.  Our intention worked as planned; we rolled into town around 6 pm and got busy making a pasta-and-meatball dinner for everyone.

After a short dinner, we took everyone to the closest beach to let the little ones burn off some energy.  The Fox family had been on the road since morning, and rolled in around 7pm; the kids were exploding with pent up energy and excitement.

Meghan and I woke up on our usual schedule, 6am.  (This continued for the duration of the week.)  The weather was forecast to be poor, and it proved true for most, but not all, of the day.

We headed out to a full-size super market in search of a coffee maker (the house’s was AWOL) and groceries for dinner.  I prefer to spend a little extra money rather than pack the car with perishables.

After breakfast, the weather cleared enough that almost everyone headed to the beach — I stayed home and napped to catch up on a week of poor sleep, and missed seeing a Great White shark off Marconi Beach.

Dinner turned out to be an unpleasant adventure: we had picked up a pair of roasting chickens that morning, but after unsealing the packages we discovered that the fowl had gone very foul.  Tim and Kelly started cranking out their dinner planned for the following night, and Meghan and I dashed back to the store to get our money back.

After dinner and the little kids had gone to bed, we sat down to play Cards Against Humanity —with Alpha and Beta.  It was a night that they will not soon forget… nor will I.

I woke up early to a beautiful day and took a bike ride around the perimeter of Wellfleet.  The ocean side of the cape was still socked in with fog, but the land and western side were clear.

After breakfast we took a ride down to Chatham for some shopping and lunch.

We introduced the Fox kids to Ponyo.  Tim and Kelly don’t seem to be big on anime, but the kids were fascinated.  (Sorry, guys!)

A documentary of Ted Williams premiered on PBS that night, which was important to Joan, so we cleared the deck, got the kids in bed, and watched with her.

We chose to go hiking around the Marconi Wireless Station on Tuesday. 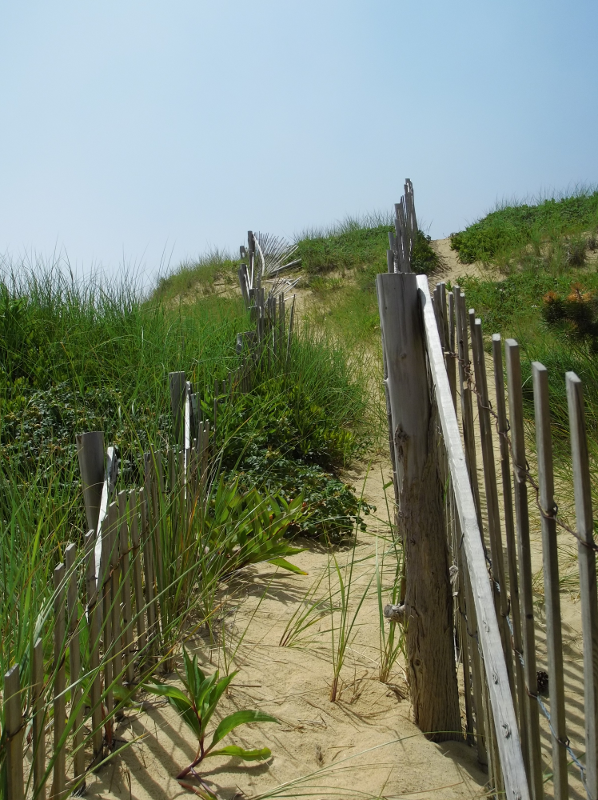 Day 4: Biking and A Guest

Meghan and tried out the Cape Cod Rail Trail, which has a trail head in Wellfleet.  Our goal when we started was Marconi Beach, but the ride was so easy we kept going and made it to Orleans before turning around.

While we were gone, the Foxes hit Mayo Beach in Wellfleet.  When Meghan and I got back we headed to the beach with the girls as the Foxes were leaving.  We stayed about an hour and a half, and came away with minor sunburns, but the water was warm and the swimming was easy.

We hosted a friend of Joan’s who lives on the Cape, and her young daughter, for dinner.

On this night an issue withe the youngest of the Fox clan, Kappa, not going to bed at bedtime became particularly troublesome.  We pledged to find doorknob covers the next day so that he would have to stay in his room at night, even if he wasn’t going to go to bed.

After a very slow start to the day, we headed to Provincetown with Joan while the Foxes went back to the beach.

We started at the far eastern end of the main drag and worked our way westward.  People watching in P-Town is always an adventure.  The girls are still young enough to not really notice how bizarre the crowd is and have more fun shopping.

Meghan, Alpha, and I spent the day being tourists.

We checked out the Cape Cod Lighthouse, where Meghan went up –and down– the spiral staircase of the lighthouse.

We then went to the Pilgrim museum and tower in Provincetown.  I, however, was the only one to climb the tower.

After dinner at home, the adults stayed up to watch Jaws with the RiffTrax overlay.

We were supposed to vacate the house by 9 am.  We missed the time by less than five minutes (WE were ready, but the Foxes have a small army to move.)

We ate an excellent breakfast at Laura & Tony’s kitchen, and hit the road for home.  Others in the party were hitting the beach one last time, but we were all ready to be home.

600Inside the Nauset Lighthouse