Lets see what else happens today! 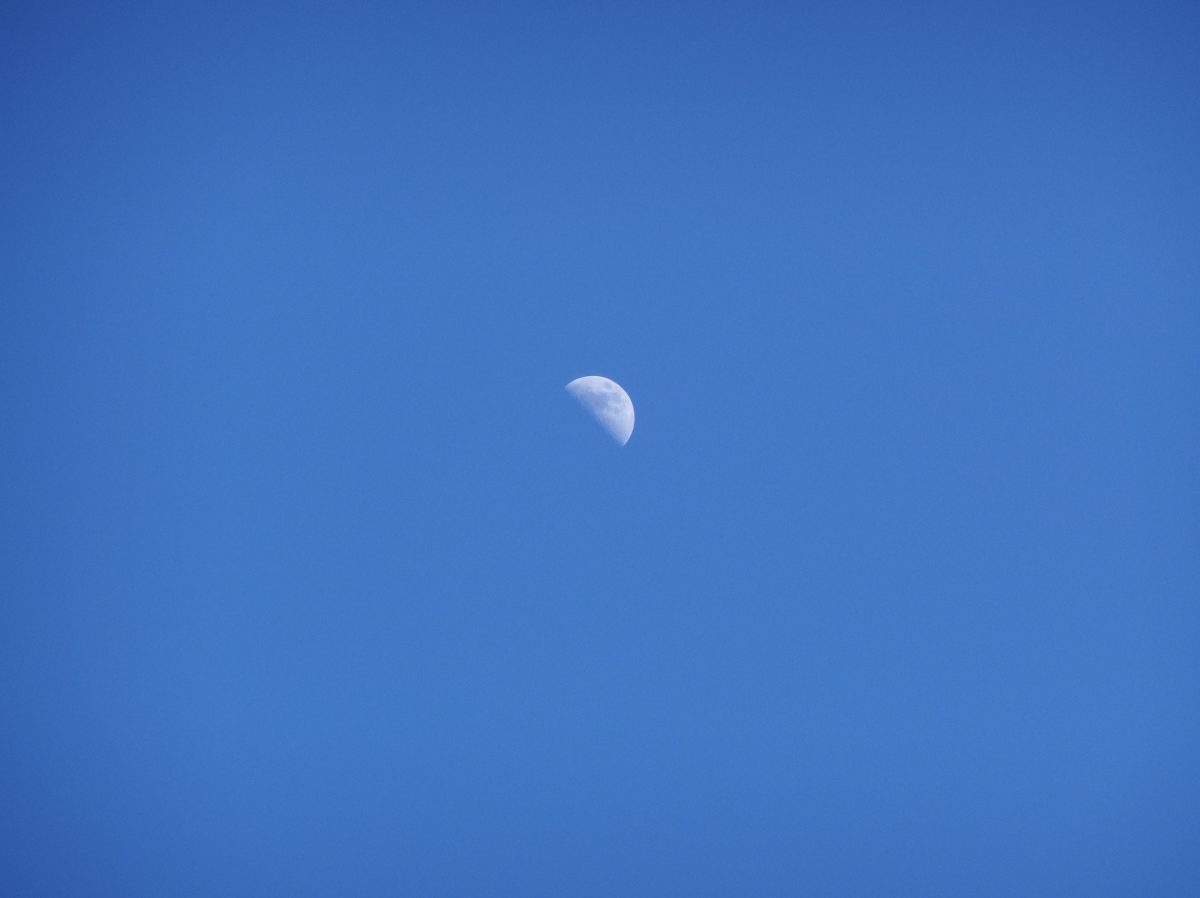 The Girl Scout troop was going to do some late night thing for a badge – go somewhere people work late, go to Panera for dinner, watch a movie, blah. I have to say, I thought Girl Scouts would be more like the Boy Scouts (Hiking badge YEAH!). But no. Girls apparently don’t do the cool stuff.  I mean, hosting an “extreme nighttime party” as a badge requirement?!

Yesterday, we figured out that the Lyrid meteor shower peaked tonight, April 21. Faced with the choice of seeing Stop and Shop getting restocked, and heading out with blankets, 3 layers of hoodies, and some Dunkin’ hot chocolate, the choice was clear.

We went to a recreation area in Tewksbury, the closest we could find to a good, dark, publicly accessible field. After setting up a blanket under us, and another on top, we cuddled together and started watching the skies. We saw multiple meteors, two normal satellites, and one Iridium flare. Every one of those satellites was spotted by Beta, the Champion of Satellite Detection. She pointed out the Iridium satellite before it had a chance to flare, so we all got to see it.

We hung out in the field for about 45 minutes before it got too cold, and we were tired.

And of course, on the ride home, Beta saw one last  meteor. Awesome end to the night.

I believe everything the media tells me except for anything for which I have direct personal knowledge, which they always get wrong.  source

Formulated by Michael Crichton, is named after Murray Gell-Mann, an astrophysicist.  (said Mr. Crichton, “I refer to it by this name because I once discussed it with Murray Gell-Mann, and by dropping a famous name I imply greater importance to myself, and to the effect, than it would otherwise have.”)

Mr. Crichton explained it further in a 2002 speech, “Why Speculate?”

Briefly stated, the Gell-Mann Amnesia effect is as follows. You open the newspaper to an article on some subject you know well. In Murray’s case, physics. In mine, show business. You read the article and see the journalist has absolutely no understanding of either the facts or the issues. Often, the article is so wrong it actually presents the story backward – reversing cause and effect. I call these the “wet streets cause rain” stories. Paper’s full of them.

In any case, you read with exasperation or amusement the multiple errors in a story, and then turn the page to national or international affairs, and read as if the rest of the newspaper was somehow more accurate about Palestine than the baloney you just read. You turn the page, and forget what you know.

That is the Gell-Mann Amnesia effect. I’d point out it does not operate in other arenas of life. In ordinary life, if somebody consistently exaggerates or lies to you, you soon discount everything they say. In court, there is the legal doctrine of falsus in uno, falsus in omnibus, which means untruthful in one part, untruthful in all. But when it comes to the media, we believe against evidence that it is probably worth our time to read other parts of the paper. When, in fact, it almost certainly isn’t. The only possible explanation for our behavior is amnesia.

We all went to see The General at The Cabot, back by a live musical performance.

The General is (very loosely) based on a real-life train theft during the Civil War, but it’s played to some drama and comedy by a prime Buster Keaton.

The true story is that a group of Union spies stole a Confederate train (which was, in fact, named The General) with a plan to damage the rails and generally cause mayhem on their way back to friendly territory.  It didn’t quite work out as planned because they were pursued and (eventually) caught.

The cinematic version takes a few artistic liberties to entertain and “wow” the audience with stunts, as well as adding a love interest and a human side.  It’s considered one of Mr. Keaton’s finest works, and “[he] always said that this was his favorite of his own movies.” (source)  It’s an amazing film to watch, moreso when you realize that the stunts were real, frequently filmed in one take, and as hazardous in real life as they are in the story.

The film that we watched was from a restoration made in 2016, with a new musical arrangement that was played live.  The quality of the film is very good, better than the gif above, while live music accompaniment is the way it was meant to be enjoyed.

The Cabot is a restored theater in downtown Beverly, MA.  It contains many of the artistic features one would expect from a classic venues.  We had center seats and a great view.  This was our first visit, but won’t be our last.

I stepped outside with the dog while she did her business and stayed for a minute to look at a “spoke” pattern in the clouds, when I heard an Eastern Screech Owl nearby.

It took me a few minutes to identify it when I got back inside, but my Google-fu is strong today.  The call is a “tremolo” which mated pairs and families use to keep in touch.  I heard it repeat several times. 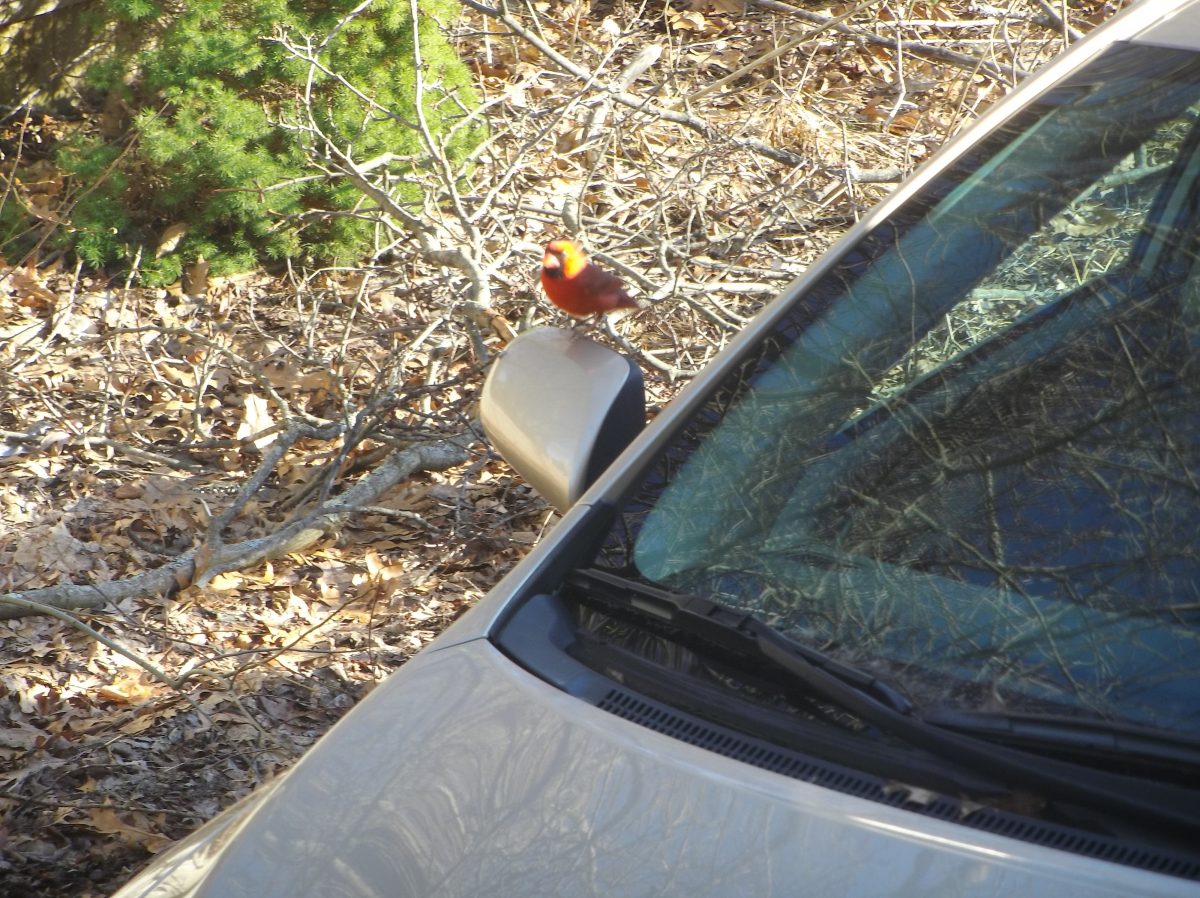 Alpha loves the Newsies. Alpha had Christmas money, and bought herself suspenders. Alpha asked me to sew buttons on to her pants so they wouldn’t snap off. Since we took her phone away, she’s got the time to pester me, so here we are.

Also, reading glasses help with the threading of needles.

You know what a cardinal is, right? Little red bird with a big red attitude. I pulled into our drive way last night, and parked next to Quinn’s pretty new car. Quinn’s pretty new car is parked in front of my mother’s car (we’re car sitting while she’s Out Of The Country). I heard a noise behind me and looked in the rear view mirror.

There was a cardinal on her rear-view mirror. And it was really really angry at the cardinal inside her rear view mirror. Lets say that again for the people in the back:

There was a cardinal attacking her rear view mirror because he saw his own reflection and they are insane, territorial little beasts.

Quinn scared him off by accident, so I’m the only one who saw him. I have pictures of the results of his assault (bird poops and some weird smears on the mirror).

This morning I came out and found my rear mirror – covered in a little bit of bird poop and weird smears.

This guy is going to be a problem, I can see already.